2 February 2012 It is with deep sorrow that we announce that dr inż. Henryk Mierzejewski passed away. He was a brilliant mechanical engineer and constructor, one of the creators of the EAGLE setup at HIL, and our great friend. His inspirational contribution to our work has been invaluable. He will be sadly missed by his son Janek (research assistant at HIL), all his family, and everyone of us.

10-14 October 2011  The first experiment 12C(32S,2p)42Ca with EAGLE-Phase II (using 16 high efficiency Ge detectors from GAMMAPOOL) was performed. The experiment aimed at determination of the low-spin level structure of 42Ca and was crucial for the analisys of the first AGATA experiment (Coulomb excitation of 42Ca). Experiment spokeperson – Katarzyna Hadyńska-Klęk.

September 2011  Publication “EAGLE — the central European Array for Gamma Levels Evaluation at the Heavy Ion Laboratory of the University of Warsaw”, describing in details the EAGLE setup,is available online at the Nuclear Instruments and Methods A website.

May 2011  A test measurement was performed to investigate the production of the K=7,8 isomer in 134Nd in the 122Te( 16O, 4n) 134Nd reaction at E(16O)= 86 MeV. For this experiment, the physicists from the University of Łódź used the same experimental set-up as in their earlier study of 130Ba. The results are promising, although the collected statistics seems low.

May 2011  A successful experiment was performed by the group from the University of Łódź to investigate properties of the Iπ = 8–, K=7,8 isomer in 130Ba populated in the 122Sn(12C, 4n) 130Ba reaction at E(12C) = 68 MeV. The measurement was performed in electron-gamma and gamma-gamma coincidence mode using 12 Ge detector and the new 12 segment electron spectrometer, constructed by Dr Wiesław Czarnacki from the Sołtan Institute for Nuclear Studies in Świerk.

In both reactions “tails” of gamma lines (modification of their shapes) were observed, which may be used for estimations of lifetimes of excited levels.

October 2010  Tenders for all components of the EAGLE liquid nitrogen filling system were concluded, i.e.:

The system will be operational in March 2011.

October 2010   New cabling for EAGLE detectors has been manufactured, as well as new mounting, which is fully suited to Phase-I detectors from Gammapool resources. Two such detectors with related shields were loaned from IPN Orsay in summer 2010, which made a detailed design of mechanical and electronic connections possible.

October 2010  Pete Jones from JYFL Jyvaskyla has promised to make five missing ACS shileds available for the EAGLE collaboration in the second half of 2011. We are still looking for five shields to be used from January 2012 till June 2013.

22-26 September 2010  HIL Warsaw co-organised the “XVII Nuclear Physics Workshop >>Marie & Pierre Curie<< ” in Kazimierz Dolny. The leading theme of the conference “Nuclear symmetries and their breaking” was closely related to the EAGLE physics case. We were particularly involved in organisations of day-long sessions focused on the phenomenon of chirality and Coulomb excitation studies. Both sessions gathered world-leading physicists dealing with these branches of nuclear structure. Full conference program can be found in the XVII WFJ website.

June 2010  Tomasz Abraham has just joined the EAGLE team. He will be take care of maintenance and annealing of EAGLE detectors.

March 12, 2010  We are currently looking for a physicist or a graduate of technical studies who will be responsible for maintenance of EAGLE detectors. More information (in Polish) here.

January 21, 2010  New experimental campaign is about to start. An experiment to study nuclear reaction mechanism by measuring angular distributions of emitted charged particles (spokesperson: J. Mierzejewski) will be performed from January 25 till February 5. In the following weeks a test of the new electron conversion spectrometer and experiment of Coulomb excitation of 94Zr are scheduled.

December 2009  Following the request of IPN Orsay we agreed to start one year later the EAGLE campaign with 20 Phase-I detectors with 15 anti-Compton shields loaned by Gammapool. An agreement between HIL Warsaw and IPN Orsay has been signed, where both laboratories declared that the detectors would be used by the EAGLE collaboration from July 2011 till June 2013. This agreement has been approved by EOC Gammapool and a new Memorandum of Understanding has been signed by EOC Gammapool and HIL.

November 25, 2009  We have the decision of the Ministry for Science and Higher Education! The project submitted by the EAGLE consortium “Nuclear symmetries and their spontaneous breaking – experiments on beams of the HIL cyclotron” will receive full requested funding.

November 4, 2009  EAGLE appeared twice on TV! On November 2 we were visited by the crew of the TV news “Teleexpress” and two days later by Witold Odrobina from the “Odrobina miasta” emission. The news clips on EAGLE are available online at the Polish Television website (around 10. minute of the emission, your computer has to be running under Windows XP/Vista with some other stuff installed) and at the website of the TVN Warszawa channel.

November 3, 2009 EAGLE experiments have been running for a while now. Recently we have performed a three days long experiment using EAGLE coupled to the SiBall ancillary detector, to study nuclear reaction mechanism by measuring angular distributions of emitted charged particles. Another week of beamtime was used for on-beam tests of innovative LaBr3 scintillators. Coming soon – the DSAM lifetime measurement in 124Cs to search for chiral symmetry breaking.

September 25, 2009  Kasia Wrzosek-Lipska presented the EAGLE setup and its possible applications to Coulex studies at the XVI Nuclear Physics Workshop in Kazimierz Dolny, Poland. Here you can find Kasia’s presentation.

September 9, 2009  The EAGLE project was presented at the XVI Colloque GANIL in Giens, France. Here you can find our poster. 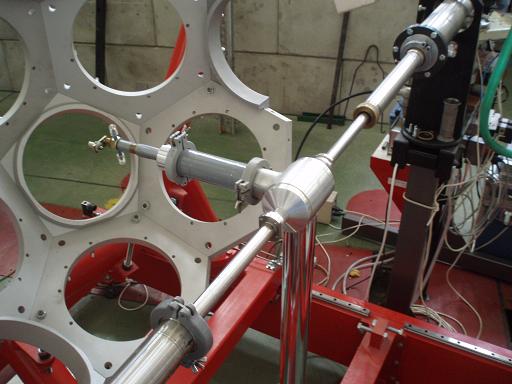 October 29, 2008 Unbelievable! We’ve got it! 20 HPGe detectors and 15 anti-Compton shields for one year (July 2010 – June 2011). Here you can find EGP Owners committee decision. We hope that this is only the begining and we will be able to benefit from GAMMAPOOL equipment more often.

May 26-30, 2008 Eagle was presented at the GAMMAPOOL workshop in Paris. Here you can find the scientific program for future campaigns in our laboratory and here a poster presenting technical details of the planned array.

April 20, 2008Technical documentation is ready. Parts machining is about to start. Everything is on schedule. Please feel free to visit our gallery to see present stage of construction.

October 31, 2007 We’ve got the answer from EGP OC concerning 20 phase-I detectors that we applied for.

October 20, 2007 We’ve got part of the money that allows us building mechanical support with guide systems for one ACS HPGe and one module of multiplicity filter. We will soon start preparing the technical documentation. Everybody is invited to consult the final version and send us their comments and remarks.

July 2006 – Student Summer Training at the Heavy Ion Laboratory. Students have tested one of the BaF2 multiplicity filter modules.

June 17 and 27,2006 – meetings with M.Kicinska-Habior to discuss a possible configuration allowing for Giant Resonances measurements.

May 24, 2006 – J. Srebrny and J. Mierzejewski present the EAGLE project status at the seminar of the H.Niewodniczanski Institute of Nuclear Physics in Krakow.

May 10, 2006 – grant application to the Ministry of Science and Higher Education submitted. We applied for funding to build the supporting structure.

May 8, 2006 – first presentation of the EAGLE supporting structure concept, followed by discussion.